HELL IS THE ANSWER 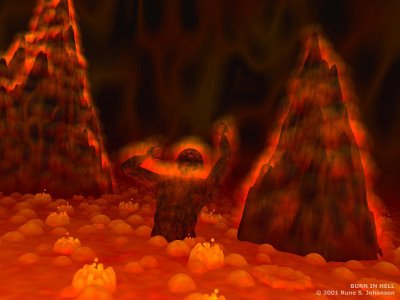 Our lord Jesus Christ has done incredible things to achieve our salvation here on earth, and yet I fear that mankind is not properly taking notice of his good work. This entry isn't meant to condemn those who have become lax in their Christian beliefs, but to make people all over the world aware of what awaits them if they don't begin to follow Christianity. What I'm talking about here is the doctrine of hell and eternal punishment.

The Bible is very clear concerning what Hell is all about in many areas, such as Christ's own words in Matthew XXV and in Revelations XIV and XX. These passages warn us of Hell and tell us that if we do not become followers of Christ we shall be cast into a lake of fire and suffer eternal torment. Well, you may ask, how more basic and straightforward could such an issue be? And I would answer that it is a totally basic and simple impetus to salvation, and yet the problem I see is that many people of the world aren't truly aware of this, or they choose to play down its importance, and therefore they are missing out on salvation.

Hell is an uncomfortable thought for some people. If one does not lead a good Christian life, instead of finding eternal bliss in Heaven after death, they will suffer eternal torment in the fiery reaches of Hell. Because the wicked have found Hell and uncomfortable thought, they have somewhat succeeded in driving the importance of Hell out of the day to day thinking of modern mankind. I think that now is the ideal time to try and remedy this situation. Hell and its eternal suffering should be on everyone's mind, every day, whether in America or China. However, there is a solution to this problem. Advertising and mass media can force people to think about Hell and if everything goes well eventually bring down all of the false religions of the world like Islam and Buddhism.

What we as Christians must do is use billboards and satellite television and newspapers and magazines to make the people of the world aware of what Hell is like and how they can avoid it by joining a Christian church. This strategy won't be an overnight success, but eventually I feel that it cannot fail. Think what the eventual effect of a giant neon billboard showing non-believers burning will have on college students walking to class day in and day out or using illustrations of Hell and its sufferers as labels on boxes and cans of food relief sent to starving heathens in such places as Africa. The possibilities are endless.

Special effects in movies today are wonderful and amazing. Why can't we use this technology to show the world what Hell is all about? People burning with much "weeping and gnashing of teeth" in an eternal "lake of fire." Just think what success we could have with this!

In this modern world of ours, the time has passed for patient hard-working missionaries to be sent to remote areas of the globe to explain to the world the way things are. We must use the tremendous power of advertising and technology to make people realize and ponder what will happen to them if they don't come around.

Children and young people facing the pressures of school and growing up can be especially susceptible to this kind of education, and Christianity's leaders should not fail to recognize this. For example, in churches and Sunday schools around the country, children should not be getting the generic bad guys go to Hell sermon. We should show it to them in brilliant color and continually drill it into their little heads.

Well, like I said, the possibilities are endless. But I guess I should conclude by saying that I for one am excited about it. Just think of it, whole societies will realize the incorrectness of their religions, less dedicated Christians will become extremely dedicated, and Satan's lair will grow emptier and emptier. To quote John Belushi in Animal House, who's probably down there right now and would therefore agree, "LETS DO IT!!"